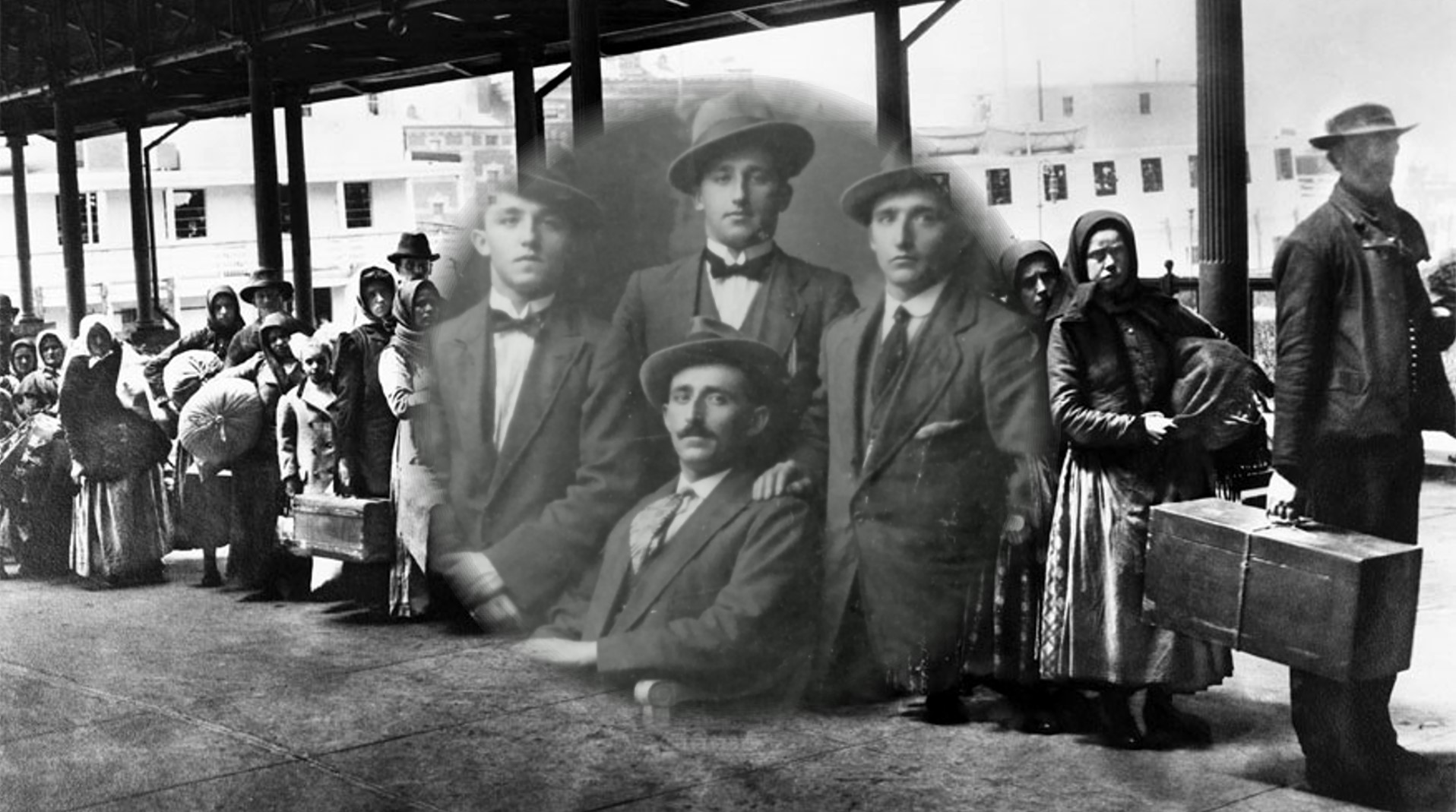 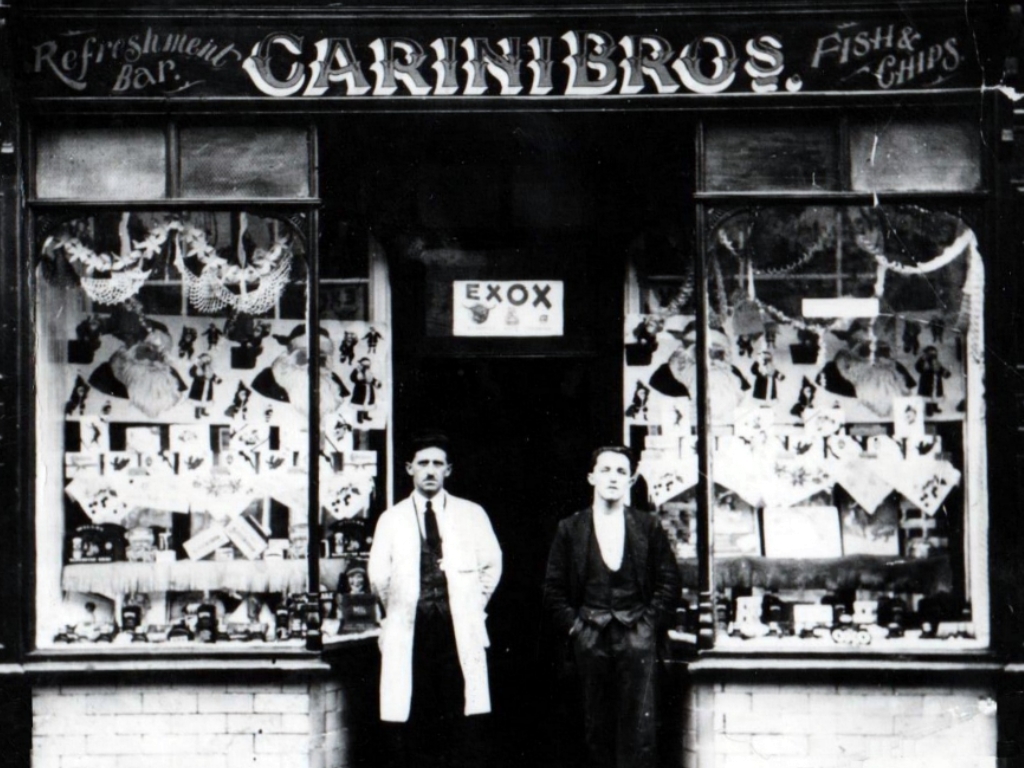 In 1911, with work becoming increasingly scarce at home (Chiesa Bianca, Bardi) in Italy, the four Carini brothers Giacomo (James or Jake), Francesco (Francis or Frank), Giuseppe (Joseph or Joe) and Luigi (Louis or Lou), decided to emigrate to South Wales in search of work. Perhaps it was the valleys and mountains that reminded them of home, in any case, it was a successful move. Jake, ended up working for café owner Mrs Zeraschi at nearby Ebbw Vale and the others in various jobs around. After 10 years the brothers decided to set up their own business. They opened “Carini’s Café, Confectioners and Tobacconist” in Beaufort, Monmouthshire, (subsquently Gwent and now Blaenau Gwent) on June  01, 1921. 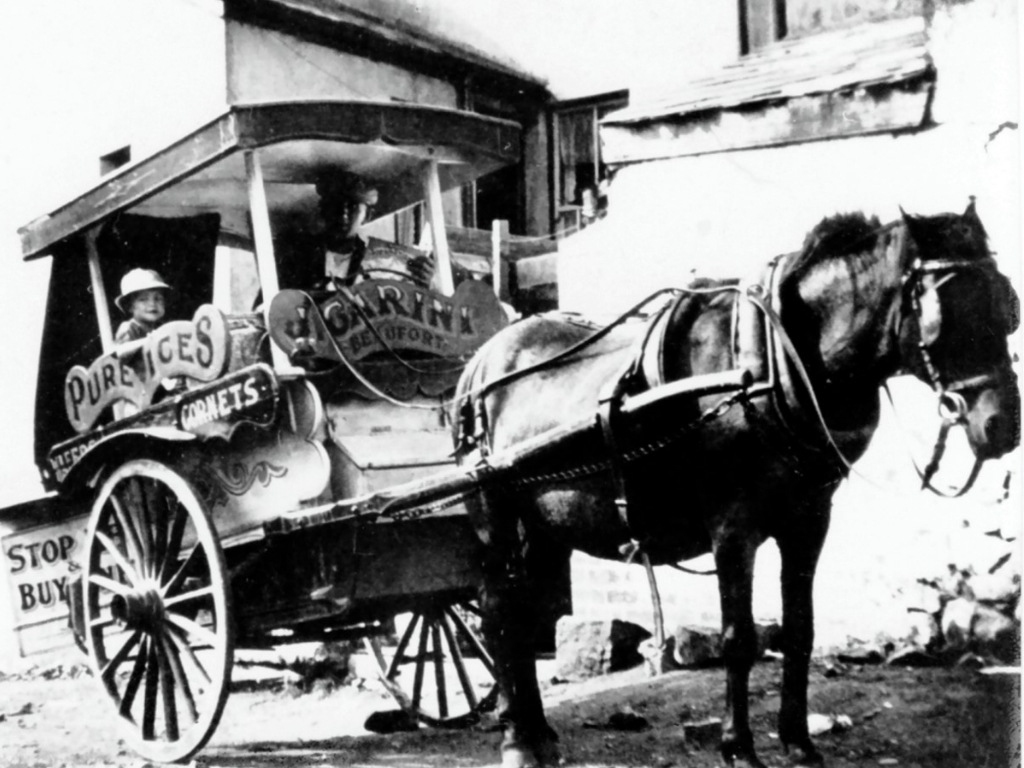 The business grew and became very much a part of the local community. Frank went on to open a café at Clifynydd, Nr, Pontypridd, Joe opened a shop at Ebbw Vale, near the Old Palace Cinema and Luigi opened a shop in Mount Pleasant Road, Ebbw Vale where his daughters Maria & Angela took over till until  1999.

Giacomo (Jake) carried on with the business at Beaufort and was blessed with four sons, Tony, Joe, Marco and Lou. Tony and Joe were destined to take over the running of the shop at Beaufort, while Luigi and Marco went out to work, Luigi in industry and Marco in insurance (helping out on Wednesdays and Sundays in the shop).

In the late 1930’s Giacomo (Jake) Carini invested in a horse and cart and took the by now "locally famous" Vanilla Ice Cream on the road for mobile sales. Pictured is one of his sons a young Marco Carini in the cart with his father Giacomo (Jake). In 1939 Giacomo (jake)  also opened a fish and chip merchants in 73 worcester street Brynmawr. 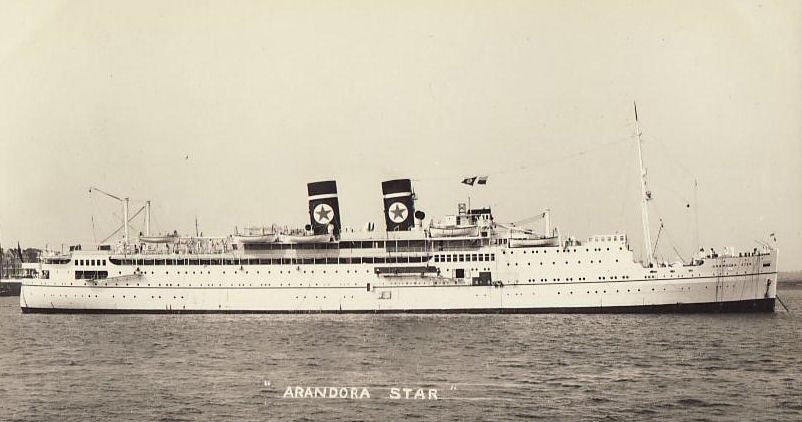 At the beginning of The Second World War, for security or whatever other reasons, the Government in its infinite wisdom decided that immigrants and other foreign nationals were to be intered (locked up for the duration of the war). Looking back, to a certain degree this made sense as while at war no one would want the enemy living next door!! However to many it was very unfair, many of these being of Italian descent and some of whom had been living in the United Kingdom for nearly thirty years. Having established themselves here and making a valuable contribution to the communities, many with wives and children!! In this context, the governments decision to inter them seemes a little harsh to say the least. Not only splitting families apart, but also depriving the family of usually its Father when he would have been needed the most. This is what happened to the Carini brothers and their families. Giacomo( Jake)  was interned to the Isle of man.

On or about the 30th June 1940, the above ship "Arandora Star" was in Liverpool taking onboard Italian and German internees and German prisoners of war to transport them to internment camps in Canada, it was to become her final voyage and sadly amongst the detainees were the Carini brothers of which only two were to return!! In the early hours of 2nd July 1940 the ship was hit by a torpedo from the German submarine U47. Over 800 souls were lost, mostly Italian and German. Over 40 of those souls from Bardi in Italy and including the two Carini brothers, Joe and Frank!! Luigi was injured and returned to his shop and Jake remained intered for the duration of the war, his young family (with help from friends and neighbours) managing to keep the business going until his return.

How ironic then, that the very people that the government believed may harm the country should be killed by its enemies!! Perhaps, those lost souls weren't our enemy after all. It's even more ironic, when we now know that the the area of Bardi, saw numerous clashes between the German occupants and the local partisans, the city being bombed by 12 Stukas on July 17, 1944.

Sadly Joe & Frank Carini went down in the ill fated 'Andora Star' in 1940, luigi was saved but injured and returned to his shop. Giacomo interned to isle of man. 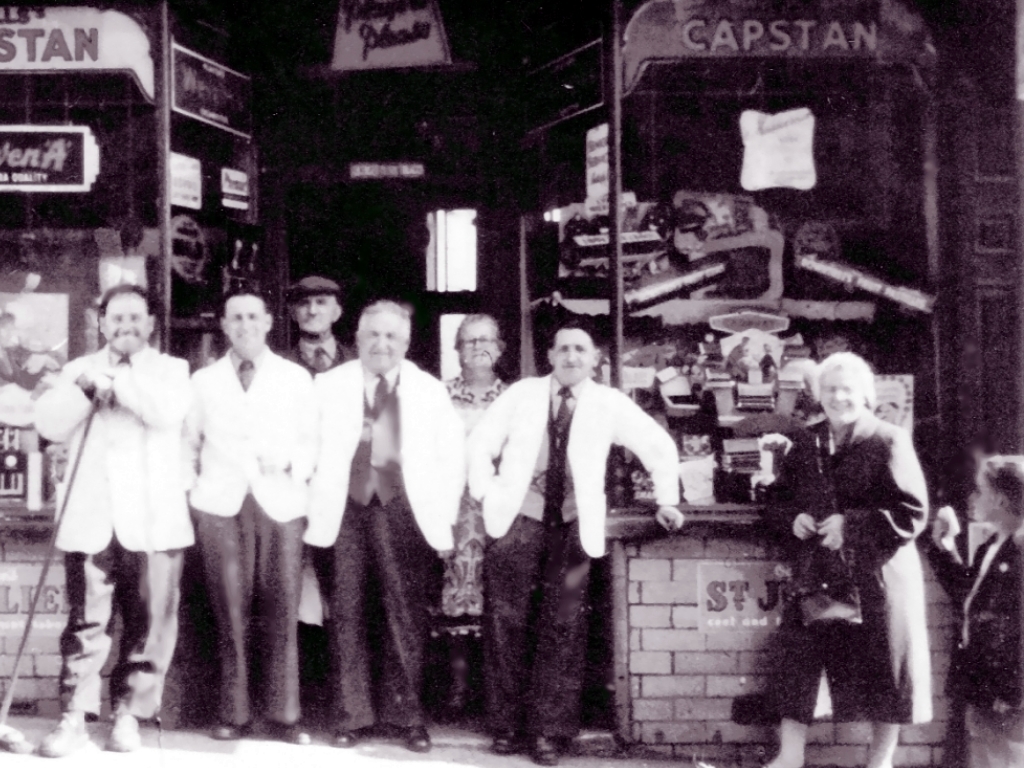 After the war Giacomo( Jake) was reunited with his family who had managed to keep the shops going in his absense. The shop in brynmawr  closed and rented out in the late 1950's.  The shop at 62 Beaufort Rise goes from strength to strength, with Jake Carini cooking on the Fish and Chip Range, wife Angela Carini  (nee Rossi) in the kitchen preparing food and making the ice cream, while the general store side is looked after by son's Tony and Joe with youngest son Marco now working full time for Pearl Insurance, helping out on Wednesdays and Sundays. 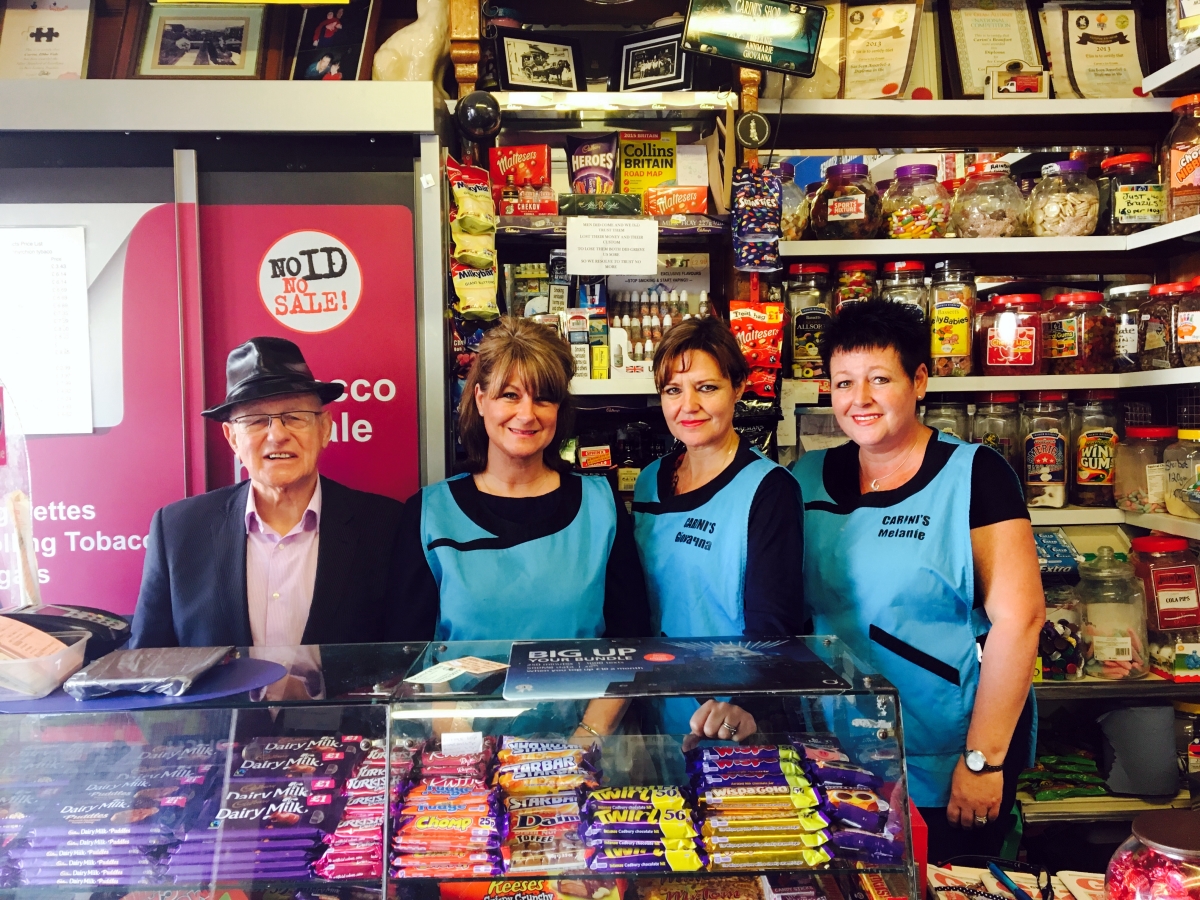 Tony & Joe retired in 1989 and wanted to sell the business, younger brother Marco decided he didn't want the business to close, so he persuaded his three daughters to give up their jobs and run the shop.

Melanie (nurse), Annmarie (supervisor) and Giovanna (catering). They took over on May 1st 1989 and are in their 32year.

The business has been open since 1921 and is the only original shop in the village of Beaufort.